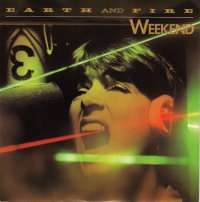 "Weekend" is a song from 1979 by Dutch band Earth and Fire. It was written by guitarist Gerard Koerts for the album Reality Fills Fantasy.

"Weekend" was released by Earth and Fire as a single in November 1979 and reached the number one spot in the singles charts in the Netherlands, Switzerland, Germany, Denmark and Portugal.

Weekend was first covered by the Swedish group Chips on their eponymously titled debut-album. Originally, the version was recorded in 1980, but was only available on the album's first printed issues, as all subsequent releases (now called "Sweets'n Chips") replaced the song with the track "Good Morning". It wasn't until the release of the 1997 Greatest Hits-album "20 bästa låtar" that the song became widely available again. The B-Side on the single was the Instrumental track "Tokyo".

"Weekend" was also covered by German techno group Scooter as "Weekend!". It was released in February 2003 as the first single from their 2003 album The Stadium Techno Experience. The single reached number 2 in the German Media Control Charts and was also a top-10 single in Norway, Austria, Denmark, the Netherlands, Finland and Sweden. 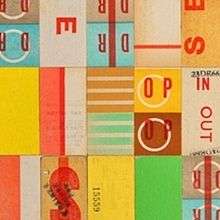 Weekend is the eighth album by Australian indie rock/electronic band Underground Lovers, the band's first after a 12-year hiatus. It followed a reunion for Sydney and Melbourne performances at the 2009 Homebake festival and the release of their 2011 retrospective album, Wonderful Things. A Rubber Records media release said: "This led to sporadic carefully selected shows and the realisation that the band still had something to say."

"The moment we got back together it clicked", lyricist and vocalist Vincent Giarrusso told The Courier-Mail. "We did one rehearsal, we had six or seven song ideas and we went to the studio to record them. The first four songs on the album are from that initial recording and some of those are first takes. The song 'Can For Now', what you are hearing is the first time we played it." The band also reunited with producer Wayne Connolly, producer of their 1997 album Ways T' Burn, to get the guitar sounds they wanted.

Giarrusso said the album was inspired by the energy of director Jean-Luc Godard's 1960s cinema hit Weekend, and Godard's film was used in their video for "Au Pair".

Weekend was an English language weekly newspaper in Ceylon published by Independent Newspapers Limited, part of M. D. Gunasena & Company. It was founded in 1965 as the Weekend Sun and was published from Colombo. In 1966 it had an average net sales of 45,000. It had an average circulation of 48,590 in 1973. The paper later changed its name to Weekend.

New Zealand (/njuːˈziːlənd/ new-ZEE-lənd, Māori: Aotearoa [aɔˈtɛaɾɔa]) is an island country in the southwestern Pacific Ocean. The country geographically comprises two main landmasses – that of the North Island, or Te Ika-a-Māui, and the South Island, or Te Waipounamu – and numerous smaller islands. New Zealand is situated some 1,500 kilometres (900 mi) east of Australia across the Tasman Sea and roughly 1,000 kilometres (600 mi) south of the Pacific island areas of New Caledonia, Fiji, and Tonga. Because of its remoteness, it was one of the last lands to be settled by humans. During its long isolation, New Zealand developed a distinctive biodiversity of animal, fungal and plant life. The country's varied topography and its sharp mountain peaks, such as the Southern Alps, owe much to the tectonic uplift of land and volcanic eruptions. New Zealand's capital city is Wellington, while its most populous city is Auckland.

Somewhere between 1250 and 1300 CE, Polynesians settled in the islands that were to become New Zealand, and developed a distinctive Māori culture. In 1642, Abel Tasman, a Dutch explorer, became the first European to sight New Zealand. In 1840, representatives of the British Crown and Māori Chiefs signed the Treaty of Waitangi, making New Zealand a British colony. Today, the majority of New Zealand's population of 4.5 million is of European descent; the indigenous Māori are the largest minority, followed by Asians and Pacific Islanders. Reflecting this, New Zealand's culture is mainly derived from Māori and early British settlers, with recent broadening arising from increased immigration. The official languages are English, Māori and New Zealand Sign Language, with English predominant.